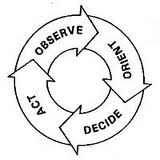 The above diagram is what is known as the decision cycle, the Boyd cycle, the OODA loop, or the OODA cycle; an important concept used in business and military strategy. John Boyd, who developed the cycle, saw decision making as occurring in a series of observe-orient-decide-act cycles. When one processes this cycle quickly and can get inside an opponent's decision cycle, one may gain an advantage. This cycle may also be applied to personal self-defense situations.

Boyd developed this diagram to explain to new fighter pilots how to allocate their energies to defeat their enemies and thus find survive dogfights. Boyd emphasized that the observe-orient-decide-act loop is a set of interacting loops that are kept in continuous operation during combat. He explained that the phase of the battle has affected the allocation of one's individual energies. Consider a fighter pilot being scrambled to shoot down an invading aircraft.

Before the enemy aircraft is within visual contact range, the pilot will be analyzing information to determine the nationality of the attacker and reviewing his own previous experience that tells him who might attack at this time. Once the there is an indication of the likely identity of the attacker, the pilot will be considering information pertaining to the cultural traditions that may come into play. Perhaps the likely genetic heritage of the presumed attacker will make the pilot consider possible issues of body mass, reaction to lower than normal levels of oxygen, etc. Therefore, even before the enemy comes into view, the pilot is looking at several scenarios that suggest themselves and forming analyses and syntheses. At this point, although the pilot has the time to be contemplative, he must also keep alert to his radio for more information and keep alert to unfolding circumstances.

When the enemy aircraft comes into radar contact, more information about the speed, size, maneuverability, etc. of the aircraft becomes available. Unfolding circumstances become much more important and it becomes imperative to make a first decision based on known information. The pilot is observing the actions of the enemy aircraft and is orienting and analyzing the data. All this leads to the pilot taking an action and then reacting to the unfolding interaction with the environment. When the dogfight begins, there is little time to devote to orienting unless some new information pertaining to the actual identity of the attacker comes into play. At this point, the information is cascading in real time, and the pilot does not have time to process it consciously, he just acts according to his training.

If the opponent is any good, he is going through the same cycle. The trick for our pilot is to interfere with the opponent's OODA cycle. This means the pilot must change his speed, direction, altitude, etc. quicker than the opponent can change his. The pilot must think and act quicker than the opponent can think and act. This is one meaning of the phrase "getting inside the opponent's OODA cycle." The other meaning derives from the military strategies first developed in Sun Tzu's Art of War. It involves getting into the opponent’s cycle and thinking processes by creating opportunities for the opponent to see react to an action as though it were something else, causing him to react inappropriately. A key is to obscure your intentions and make them unpredictable to your opponent while you simultaneously clarify his intentions. Act quicker to change circumstances faster than your opponent may adapt or react to. Create confusion and disorder to cause an opponent to over or under-react to situations that appear to uncertain, ambiguous, or incomprehensible.


As it relate to the martial arts

In a self-defense situation, this means you must be alert and observe everything happening around you, orientate and analyze this data, decide based on the data, and take an appropriate action. You must complete this cycle quickly; quicker than your opponent can complete it during combat, more slowly in other times, but you must always follow the loop.

The rapidity of action or reaction is required to maintain or regain the initiative. Variety is required so one is not predictable, so no recognizable pattern develops that an enemy may recognize and use to defeat you. Harmony is fitting into the environment and others operating in it. Initiative is taking charge of your own destiny, so you direct it instead of it directing you.

Boyd defines war as a moral struggle that is won as much by mental as by physical prowess. Wars are fought to attain peace, so the war must be worthy of the horrendous means by which piece achieved; therefore, morality plays a central role in the war. Moral values provide a set of higher goals and standards that enable us to confront mistrust, uncertainty, and menacing circumstances with confidence and courage. A moral advantage is critical to one’s strategy of combat. To win, one must minimize one’s friction in the mental-moral-physical sense and increase the opponent’s friction. One must believe in the cause fought for and seek to live for some higher good or goal than oneself

An effective self-defense strategy is to: