The new national great seal (Guksae) was adopted on February 1, 1999, to mark the 50th anniversary of the founding of the Republic of Korea and to reflect the cultural heritage. Though the inviolable authority and sacredness of the national great seal have faded since the days when Korea was under monarchs who needed the royal seal to rule, its symbolic importance remains.

The seal symbolizes national authority, power, and culture so it is used on important national documents, such as the Constitution, certificates of national decorations, appointments of government managerial officials, diplomatic credentials, and important diplomatic papers, as the final seal of approval. 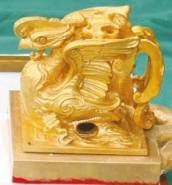 Bottom of the seal

Impression made by the seal